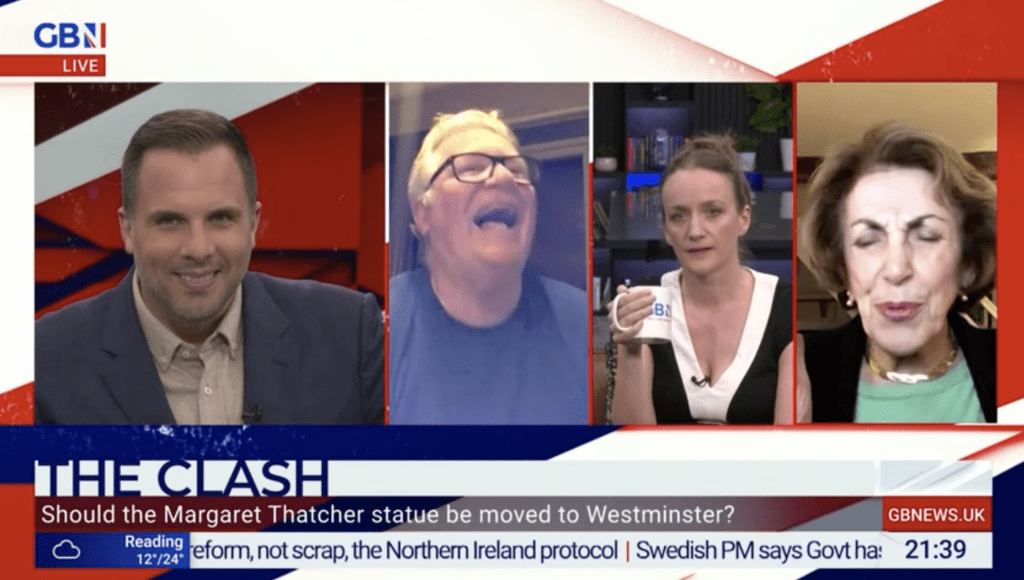 Comedian Jim Davidson OBE defended Margaret Thatcher as “one of our greatest Prime Ministers” against an hysterical activist during his latest appearance on GB News.

Jim was appearing on Dan Wootton’s show The Clash to discuss whether Margaret Thatcher’s new statue should be moved to Westminster where it could take pride of place.

He was joined by former Conservative Minister, Edwina Currie, who agreed it should.

But during an hysterical rant, comedian and left wing political activist Kate Smurthwaite suggested the statue belonged at the bottom of the Thames.

She then proceeded to spend the interview shouting over her fellow guests.

Referring to Kate’s comment, Jim joked: “As long as swims down there with it to put it there. Absolute nutters.

“She [Margaret Thatcher] is one of the greatest Prime Ministers we have ever had.

“Because she [Kate] doesn’t agree with that she has to be at the bottom of the Thames.

“This is our history. This is crazy.

“She should take pride of place in Westminster with other greats like Churchill and Mandela.”

He added: “You don’t want anyone to be celebrated whose views you didn’t agree with.”

Jim’s Ustreme streaming platform has just finished recording a new series of Pull Up A Sandbag, interviewing Falklands heroes on the 40th anniversary of the conflict, which took place under Thatcher’s leadership.

He told The Clash: “On my TV station we’ve just interviewed the big stars of the Falklands War. All heroes in their own right. Each one of them idolised Mrs Thatcher and they fought a war under her.

“She’s loved by lots of people but just not you. That doesn’t make you right and everyone else wrong.

“You just think your opinion is the one that can’t be argued with.”

The interview came after 59-yer-old activist, Jeremy Webster, pelted the new statue of Margaret Thatcher, in Grantham, with eggs.

*The full series of Pull Up A Sandbag will be streamed exclusively on ustreme.com from June 1.