‘NO! HE SHOULDN’T HAVE TO APOLOGISE’: Jim gives his view on Kenny Shiels’ ‘emotional women’ comment during GB News appearance 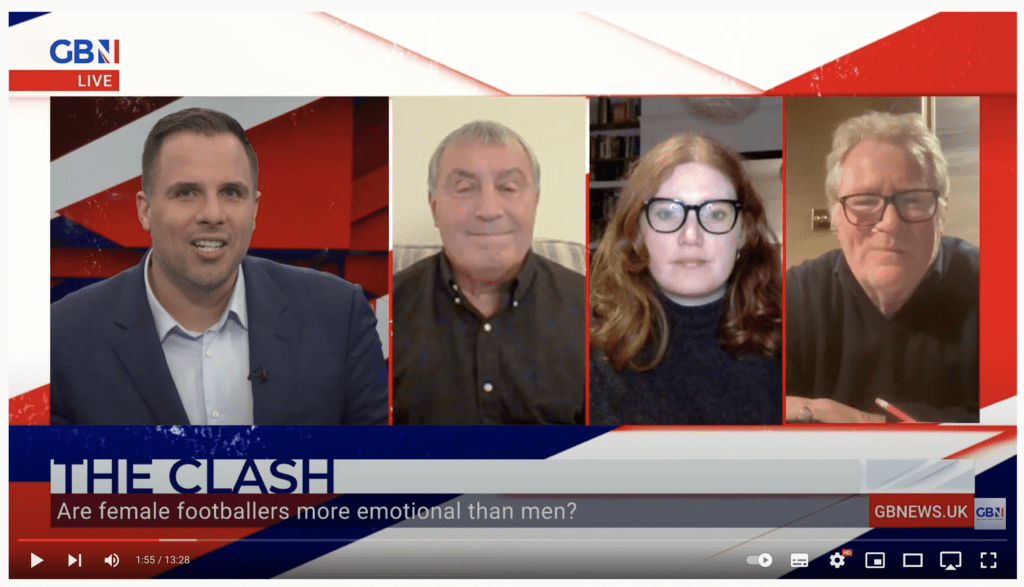 Jim was invited to appear as a panellist on Dan Wootton’s show to discuss whether it was right for the manager to be criticised for saying ‘women are more emotional than men’ after his team lost to England.

He said: “Well I think it’s all part of this cancel culture. He’s said what he thought, his opinion.

“He’s just been beaten 5-0, the girls that turned out have sat there and talking about emotional problems and mental problems on the pitch.

“So he’s said something, it’s upset someone who’s a bit woke and they said you better go on and apologise and I think it’s a bit sad.

“Someone is just stirring it up. Of course women are no more emotional than men. I’ve seen Ian Wright cry on the pitch when he played at Charlton.”

After seeing his team concede four goals inside 27 minutes, Mr Shiels had said: “In the women’s game, I’ve noticed, as I’m sure you’re aware, if you go through the patterns.

“When a team concedes a goal they concede a second one in a very very short period of time, right through the whole spectrum of the women’s game, because girls and women are more emotional than men.

“So, they take a goal going in not very well.

“When we went 1-0 down we tried to slow it down to give them time to get that emotional imbalance out of their heads.

“That’s an issue we have. Not just in Northern Ireland but all of the countries in the world.”

He then added: “I shouldn’t have told you that.”

During the conversation on GB News, Jim added: “This is woke creeping in everywhere, let them girls get on. They’ve just been hammered 5-0.

“Talking of emotions, when someone scores a goal these guys run round like headless chickens and they whip their shirt off.

“Well, I’m looking forward to seeing that in women’s football to tell you the truth.”

Despite raising laughs with Dan and fellow panelist, goalkeeping legend Peter Shilton, the joke did not go down well with fellow panelist Ella Whelan, who said: “My fellow panellists have been joking about women lifting their tops which isn’t very funny.”