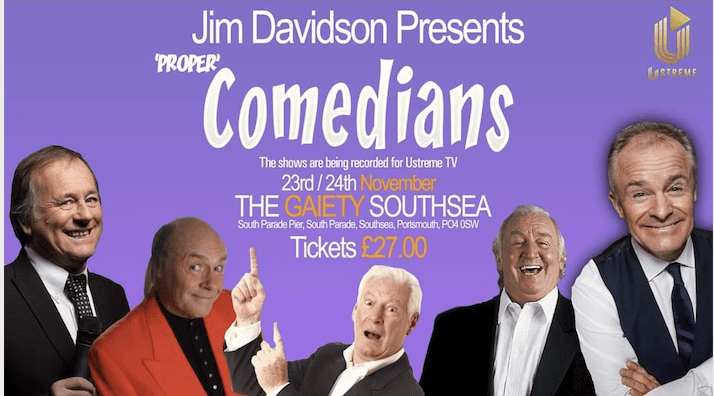 Comedy legends have signed up to appear in their own fast-paced comedy stand-up show being produced by Jim Davidson’s Ustreme channel – including many of the original line-up of long-running ITV hit The Comedians.

The show, called Proper Comedians, will be filmed in front of live audiences in Southsea, and then edited together into half-hour shows for Jim Davidson’s streaming channel.

Jim said: “Comedy shouldn’t be about giving lectures to the audience. The world is mad and sad enough, and people just want to enjoy themselves and have a bloody good laugh.

“We are delighted to have a number of the original line-up from The Comedians performing. It’s going to be a great laugh…don’t you worry about that! I don’t think these boys even know what political correctness is.”

Show producer Jim will act as compere for the live shows, which will be filmed at The Gaiety, in Southsea, on November 23rd and 24th. Each comedian will perform 20-minute stand-up sets, with episodes then edited together to air on Ustreme in December.

Born out of the working man’s club circuit, it ran for eleven series between 1971 and 1992, spawned Christmas specials, a touring seaside show and a hit album. It was watched by more than 15million people.

Tickets for Proper Comedians cost £27 and are available via here